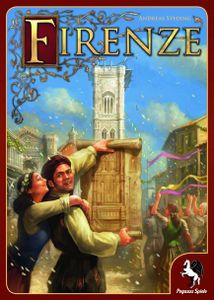 This time i won’t be talking about a new game for me. As i’ve been playing Firenze for a while. But i think it is worth mentioning. This is one of my all time favorite games. And it’s main quality is variability. Although the main thing you do in this game is building towers, but there are a lot of choices. Whether to build a lot of smaller towers or build less, but taller towers granting more points, or maybe trying to fulfill tasks on various cards or just building enough to capture all the “bonus balconies”. There are also lots of various useful cards that make it easier to build towers, help avoid negative points or.. lets you harm your opponents. yeah, that’s one of the rare euro style games with players confrontation. Although, nothing ground braking. Usually you can only remove one brick from someone’s tower or steal one brick from other player’s storage. But sometimes one such move can lead to a complete destruction of a long honed tower. Though, one can argue that it would be more a fault of a tower owner as he didn’t pay attention to the situation and took  a risk. And it leads to a one slight negative of this game. I have understood this while attempting to teach a new player. It is hard to wrap your head around all the nuances and options in this game and it can be overwhelming. It probably could take around 5 games to fully understand all the strategies, to see all possible risks and options, when a player starts to think few turns ahead. And then full potential and beauty of this game should become clear. Firenze is using an interesting mechanism for cards drafting, which can be seen in some other games. It costs nothing to pick first card in a row. But to take cards further on the row you have to pay. And to pay with the same bricks you use to build towers. The game is also not very long. Although i mainly play it with two, it also plays very fast with 3. But i have never tried it with the maximum of 4 and somehow feel it would be a bit too chaotic for my taste. It would be hard to follow some strategy. Although i have only played it in the electronic form (Yucata), its physical version looks beautiful with all the 3D towers players are building with little bricks. Unfortunately this game has been long out of print and it is nearly impossible to find it in the stores and for a reasonable price. Yucata implementation of this game is clear and convenient, although one would have to get accustomed with a bit confusing turns structure. 9/10