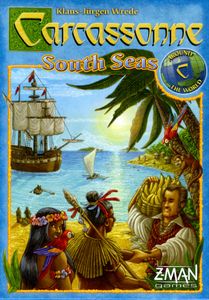 Carcassonne is one of the first board games i’ve tried. And one of the most favourite. I also own a few expansions, though i probably like it the most without them. Because it is so simple and in the same time so charming. South Seas tries to shake it up by adding contracts, when you have to collect resources by completing objects and then spend those resources to fulfil orders and get points. It’s an interesting twist, but i like classic Carcassonne more, when i get points after completing objects and some points for incomplete objects at the end of the game. Also it seemed that in this variant there are a lot of tiles with roads, therefor it was harder to complete islands. And just in general it was a pain to find a spot for a tile when there were so many tiles with incomplete roads around. Of course, there is a simplified fishing (fields) counting, when you don’t have to complete them. But again, i liked how you could swing the score with the farms in the end. In general, while playing this variant, i tend to think that i should be playing the original. But this is not a bad game. A solid 7/10.

Yucata implementation: it is using framework 2, so it looks like many other games, though it could have brighter colors as it is hard to see your meeples sometimes, especially when the map grows. 8/10.