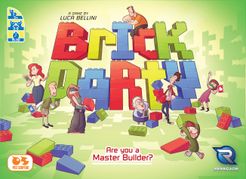 This game can easily be included among the party games (hence the part Party in the name). Because there is no lack of laughter or emotions during its play (sometimes very strong emotions though). This is my second game from Renegade Game Studios. I’ve seen its review long time ago, but when i saw it on my FLGS website with a discount and a very attractive price, i thought “Why not? It can be handy in my collection”. So far a few plays of it were truly fun. It can be hard though, especially for those having trouble imagining geometric shapes in their minds (like myself). But when using only the easiest level cards and with less strict rules, it can be also used with kids. It will help developing their dexterity skills and analytic vision, and maybe also cooperating skills 🙂 There can be permanent or temporary pairs of players during the game. Each pair must decide who will be the architect (telling what and how to build) and the builder (the one actually building the thing) during each round. The architect must also choose which card among ones he or she has will be built (there are 4 types of cards of varying levels of difficulty). And all this is spiced up with special rules cards, one of which is flipped before every round and dictates how things should work. Maybe the architect must remain silent and only use gestures to give the instructions. Or maybe the builder has to build it blindfolded. It will be hilarious either way 🙂 It can be very difficult to obey the rules sometimes and not put the right brick into builder’s hand or to be silent, when you shouldn’t speak. In time you start to see what works better in different situations, how you can better describe things when one or another rule is in play. When you become the builder, you start to realize how it was for another player, when you was the architect and vice versa. It’s a very simple game with a very few components and all the figures on the cards are fairly similar. So the freshness of it can evaporate quickly. Though, there are a few blank cards for those who want to create their own rules. The game can also be created with a few spare Lego bricks and paper sheets for figures and rules. But it’s a fairly cheap game, so it’s probably not worth it to invest time to build your won copy. Simple, but fun. Strong 7/10.