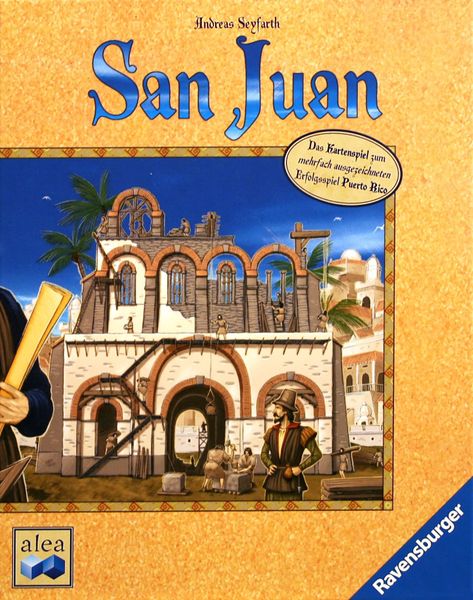 I’ve always heard comparisons between San Juan (or Puerto Rico – The Cards Game) and Race for the Galaxy and was wondering is it true, that they play so similarly. Many even prefer the former game. I saw a few reviews and knew mechanisms, but it wasn’t the same as to play it yourself. So, i was happy to see it appearing on Yucata. And.. i was disappointed. It was nothing like Race for the Galaxy. Well, after playing 6-8 games i kind of started to like it a bit more. And with more buildings from the expansion (which is included now with the base game) it has some variety. But Race for the Galaxy still has something more. Yes, in San Juan you also build producing buildings (settle planets), produce goods (same), sell goods for cards. It is also similar how one selecting an action gets a bonus and others can take regular action. You also use cards to pay for building. There are also 6 points buildings that give your lots of points at the end of the game. It is hard to pin point the difference, but RftG (Race for the Galaxy) just feels more dynamic, you work with more very different cards, it seems that you also draw more cards during the game and have more choices. There is also military power in the base game of RftG, which gives another path to victory. And 6 points buildings in RftG just are more exciting. RftG also has another category with developments. I guess all not producing building in San Juan can be called developments, but many of them are so simple and standard. There are also a lot of just straight points at the end buildings (monuments). Actions in San Juan feel a bit more bland than in RftG. I rarely take Councillor action as it is easier to just produce and trade and get lots of cards this way. And in RftG you always choose also your own action, not just do what other player selected. The theme itself is not giving me much either. And the whole art style and color palette is very pastel and bland. I don’t want to bash on this game, it is still a very good card game and i can see how one can prefer its maybe milder play and easier icons (or no icons actually) to RftG, but i prefer the latter. 7/10