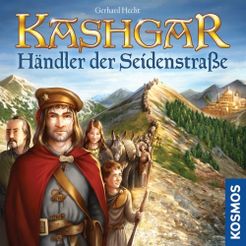 Kashgar (the name is longer, but whatever)

This game is available on Yucata for a long time, but it didn’t draw my attention after reading its rules. Until recently i’ve heard someone on internet praising it. So i’ve decided to give it a try. I have to admit that its mechanism is indeed unique (deck building 3 or more decks). But the gameplay is not exciting. It’s just boring and too prolonged. Although i’ve only played it on Yucata with two players and some of my opponents were living on Yucata and doing 10 or more turns per day, sessions of this game were still lasting for too long. First, its uniqueness (3 or more deck building and playing) just irritates. You constantly have to try to remember which card is where and with what card it has to play, you have to check all your decks to remember what you were trying to do with each. Of course, playing it live, on a sufficiently large table would allow to spread cards to be able to see them all. On Yucata you only see actions of two first cards in a deck and then you have to click on every other card, because it is hard to tell from the name itself. Of course, on Yucata this is like that to save the screen space, although it can be improved as you don’t really care for your opponent. Then the way of adding the cards to the decks. You deck is growing and you see the cards you need less and less often. There are ways to trim the decks, but then we face another annoying aspect of this game. Many cards are worth points at the end of the game. So if you remove them, you lose points. Yes, this is a search for balance between good cards, sacrificing these good cards to get more resources and complete better contracts. But it doesn’t feel rewarding. It’s just stale and very slow pacing. Feels more like a very painful and slow crawling. Only 6/10.

Yucata implementation: although the screen space is limited, but i think it is possible to spread the cards better, especially when you don’t care for your opponnents moves. Also the moves history window is always positioned in the middle for some reason and when playing on tablet the last move is hidden behind game management buttons. Although, as i’ve said it is not so important to see what you opponent did. 8/10.