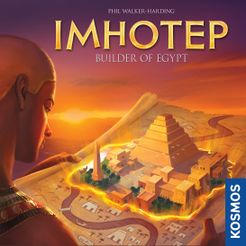 Wanted to try this game since it was nominated for the Essen Spiel awards. I also like some of the other designer’s Phil Walker-Harding games (Sushi Go!, Cacao). First suspicion appeared after watching people playing it on video. Recently this game has been added to Yucata library, so i rushed to try it out. And, sadly, confirmed my doubts. Although the game has some interesting mechanisms, as when players in order put cubes on boats and then one of the players decide where to sail one boat. Although every points generating board has two sides and provides some replay value. And the game is oriented to families based on its weight. All in all it lacks long term strategy planning and even ability to have some short term tactic. Because there is very little control of what is happening every turn. It is hard to explain with words. This is better seen when playing it. Say you want to add a few cubes in a row to one scoring board. You put one cube on some boat, but on the other player’s turn anything can happen. He may add his cube right after yours or sail the boat or anything else. There are special cards that lets you play around this a bit, but to get them you have to spend cubes and sail a boat to the place with them and someone can beat you to that and sail the boat first to gain the right to pick cards first. Although many games doesn’t have an absolute control, this one has too little of it for my liking. I have only played it with two players, but i somehow feel it should be even more chaotic with more players. Maybe this game is better suited for family play evenings or playing during a party not paying attention to strategy or tactics. But this is not what i like in games usually. 6/10