I’ve been reminded recently about how long i have spent with IgniteRealtime.org community (a place for XMPP based projects and people using or developing it). So i have checked my forums profile and today is exactly the day i have joined 14 years ago (2005.01.24). This is a few months later than i started at my first job. And my first major task there was indeed to setup an internal communications solution (“like Skype, but for internal usage”). That’s how i’ve found JiveSoftware and then Jive Messenger (later renamed to Wildfire and now Openfire). Then Jive switched to other products and created IgniteRealtime to donate their older projects to the community. I have heard about Jabber (currently XMPP) before and i think have tried it a bit a few years before while studying at university. When i had my first internet line installed at home my ISP also had an internal chat system for its customers based on Jabber. So picking this technology was an easy choice for me. It also was flexible, as you could use any XMPP client and you could choose one better suiting your company’s needs. And it was free 🙂 At first i had a lot of questions, but after a few years i was mostly helping others to fix problems, configure things. It has become a natural daily routine to check forums and reply to a few posts, to pop in into real time chat with developers and users. In 2015 i’ve decided to step in and took over then abandoned Spark project (XMPP client). Although i’m not a developer, so it was mostly managing patches, filing bugs, doing releases and writing a few lines of code here and there. Spark is currently in a limbo with a few major issues blocking its next release and absence of experienced coders contributing to it also hurts, but it still moves forward slowly. Just fixed a few issues the other day. Although we have switched to Skype for Business at work i haven’t quit this community and still looking forward to participate and collaborate for many years onwards 🙂 END_OF_DOCUMENT_TOKEN_TO_BE_REPLACED 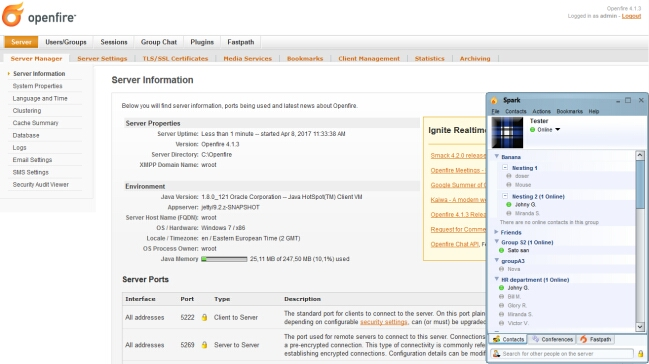 It’s a common question at IgniteRealtime.org (forums or chat room) – “Is there a guide to setup everything?”. Better yet, this guide should be easy to follow. There is no such guide. Well, at least from the community itself. I’ve seen a few guides in the wild. One of the recent ones is about combining Openfire with ClearOS and Openfire Meetings, which is an overkill for a novice user wanting to just setup an IM server. Some other guides are lacking details or are old. There are hundreds of possible setups, with different network schemes, operating systems, etc. It is impossible to write a simple guide and combine all this information. It will be hundreds of pages long. So i will take a very simple scenario and write a guide based on it. I hope one would be able to use it as a base for other scenarios. I will touch some crucial complex parts a little just to point that they are there and are important, but i won’t go into much detail (especially that i don’t have deep expertize on them).

This guide is for the latest official version of Openfire (4.1.3) and Spark (2.8.3) at the point when writing this guide. Based on Windows operating system (both server and clients). No LDAP integration. No external database. Just as simple as possible internal IM server. END_OF_DOCUMENT_TOKEN_TO_BE_REPLACED

OK. Calling myself a developer would be a stretch, but still. Two years ago i had no clue what Git (and GitHub) was and how to do a PR. I’ve done many PRs since (nothing ground braking, usually fixing minor stuff or my own errors), but i still remember that feeling when your first change is actually added to a real application that others use 🙂

Bit by bit i have get rid of almost every commercial program at home and replaced them with free analogues. And when i came to my first workplace i was given a task to install an internal instant messaging system, and of course, better if free of cost 🙂 So that’s was the start of my now older than 10 years acquaintance with Ignite Realtime. To be true, at first it was a free system (instant messaging server – Jive Messenger) distributed by a commercial company Jive Software. Already then an active users community started to build up around this and other free products of a company. Company’s representatives themselves (there were just two men in the company at first) also collaborated and embraced ideas of free open source software. Their business direction changed later and the current free products became not relevant to them. So the source codes of programs has been made public (became Open Source) and handed over to community, so they could continue improving it. Also, for many years now Jive is providing community a place for a site, tools for registering bugs, installers production, collaboration. END_OF_DOCUMENT_TOKEN_TO_BE_REPLACED