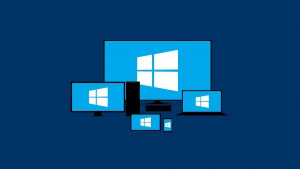 Windows 10 topic is getting lots of buzz in the IT world currently. This freshly arrived new version of Windows operating system symbolizes a new step in Microsoft history. Even though, this could’ve been another Windows 8 update (e.g. Windows 8.2), but it seems that Microsoft tries to shy away from that version, which haven’t reached wide popularity, also skipping the 9. This way they want to emphasize Windows 10 importance in the new idealogy “windows as a service”. Although this principle looks suspicious so far. Maybe there going to be monthly or yearly fee introduced at some point? But after watching Windows 10 presentations it becomes clear that the biggest company’s goal is to attract developers and users into the application store (“Windows Store”) which is expected to generate a revenue. Of course there is no abandoning of OS selling to hardware manufacturers market. Free upgrade from Windows 7 and 8 is valid only for one year (for now, who knows whether it will be extended, if this move justifies itself). When buying a new computer, OS cost will be already included. Also big companies still be paying yearly fees for the ability to use any OS version they need, along with Windows 10 (“Software Assurance” program). The thing that free upgrade was offered and the offering and distrubution method shows that Microsoft is hoping for the biggest and fastest impact. Windows 10 campaign was interesting and even a bit aggressive, when it wasn’t limited to events and ads only. Windows 10 users received a message to their computers with an offer to upgrade, and it looks like many did agree. Based on Microsoft data Windows 10 spread after the final release is really huge. Of course, the question is how many people were surprised to see a significant change on their computers’ screens after “some update”. Well, not as significant as in the Windows 8 case. Microsoft admitted after all that not just mobile users exist and that many requires a desktop and.. yes – Start menu. Microsoft’s privacy policy settings in the new Windows versions were widely discussed. On one hand, this is natural to be able to provide a user the most personalized experience (“Corana” assistant, which is learning your habits, so it could help you better; typing errors fixing tool). Also they want to provide the same experience in all user’s devices. That’s why usage information is sent to Microsoft servers, along with other telemetry information about the system state, usage patterns, etc. Some are too paranoid making huge deal out of it. The others close their eyes on this. Personally, i do not consider Microsoft being an embodiment of evil, but i question the need to send this information, if i’m not using all these services. Also this can be a question of security and trust in the manufacturer in the case of companies. END_OF_DOCUMENT_TOKEN_TO_BE_REPLACED