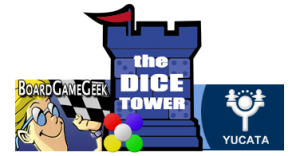 Even when our gaming group was broken up for some time, i haven’t lost interest in the modern board games industry. From the very beginning i liked Tom Vasel’s channel about games on the Youtube page – The Dice Tower. I try to watch every his video (game reviews, top’s, game plays, videos from games conferences). Also i have quickly found a site, which is the main portal for all board game fans – www.boardgamegeek.com. You can find information about a particular game, discuss it in the forums with other gamers from all over the world, rate games in the catalog. I always try to rate on this page every new game i’ve played, add to the list of games in my profile if i purchase new one (a link into my collection (without the expansions)). END_OF_DOCUMENT_TOKEN_TO_BE_REPLACED